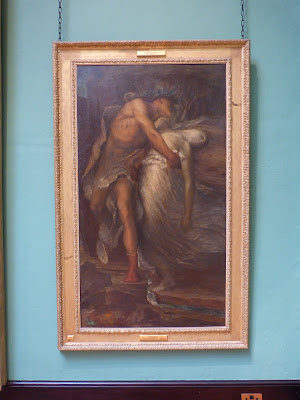 I love it when things go full circle.
After months of researching, reading and writing for Heritage Open Days for the Friends of Tunbridge Wells Cemetery  and finally presenting my walk and talk on Women, Writers and Widows, I have been filing my notes away. As always the research never stops, even when the event is over the mind and the eye are always alert.
Today I visited Watts Gallery and stood in front of Orpheus and Eurydice by G.F.Watts and silently my heart skipped a beat and I was back in Tunbridge Wells Cemetery standing at the grave of Rachel Beer.  I had listed the artists included in the 188 lots of her house sale, Chancellor House, Tunbridge Wells by Christie's on July 22nd 1927 and they included Watts. I knew that from the time spent in the British Library going through the sale details. So on arriving home I checked again and also referred to The Times report of July 23, 1927; pg.9; Issue 44641 [ for those of you who like academic referencing] and there it was G.F.Watts, Orpheus and Eurydice- 320 guineas [At today's prices£19,202.34].

I am sure it is worth so much more.
And so indeed, is Rachel Beer.

Throughout the day I thought again, to find the  Victorian Woman one needs to go through the Victorian Man.

And here I refer to her nephew, Siegfried Sassoon, from his book 'The Old Century and Seven More Years' p. 102.

'I wanted to be there myself, helping Auntie Rachel to enjoy herself. Mixed up with this was the idea of Orpheus and Eurydice. In the hall at Auntie Rachel's house there was a picture of them by G.F.Watts.[...] I had a conflicting awareness of what I desired for Auntie Rachel and of her doomed endeavour to bring back from the underworld of death that happiness which she had once known and which she refused to give up as lost beyond recovery.'

Rachel Beer 1858-1927, First female newspaper editor. Editor of the Observer, Owner and editor of The Sunday Times in 1893. Vice-President of the Society of Women Journalists [The First Lady of Fleet Street, E. Negev,Y. Koren (2011)].

Friends of Tunbridge Wells Cemetery
Posted by newtonhouseltd at 21:51