A walk with Suffrage in Tunbridge Wells 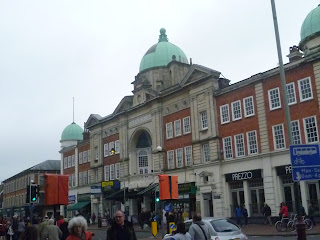 Whilst the twentieth century sirens wailed and the street canvassers tried to encourage the buying of insurance, a group of about thirty people went back in time almost a hundred years and entered the world of women's suffrage.
Lead by Dr Anne Logan from the University of Kent and organised by Ian Beavis from Tunbridge Wells Museum to accompany the Inspiring Women Exhibition at the Museum we walked some of the steps made by campaigning women from the early 1900's and on what appears to be the solid ground of today we discovered secret histories which are hidden beneath the facade of 21st century life.

Starting at the Opera house we heard about the various organisations associated with Women's Suffrage and their associated colours not just the purple, white and green. At the Opera House in 1906 the National Union of Women Workers met on the subject of 'Franchise for Women' and Amelia Scott became the Vice-President. Olive Walton , also from Tunbridge Wells hid over night in the building so that she could interrupt a meeting of the Liberal Federation with the question' When are you going to deal with women's suffrage?' 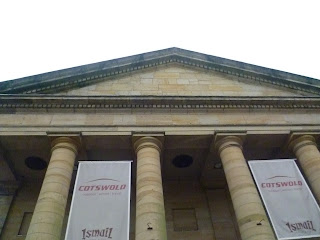 We then passed what was the Congregation Church and which now houses Cotswolds. It was here that the Le Lacheur family attended. They were very active in the Women's Freedom League and The National Union of Women's Suffrage Society amongst others. 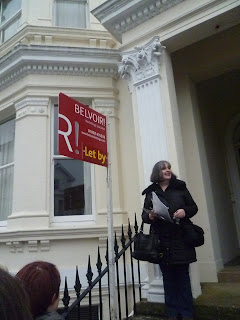 York Road beckoned, the lovely street which often wins Royal Tunbridge Wells In Bloom competition also includes the house of Gertrude Mosely. No plaque marks her home at number 60, but some lucky person is going to rent the flat in the house in which she lived. She was a member of the Jewish League for Women's Suffrage and the joint secretary of the Tunbridge Wells branch of the NUWSS [National Union of Women's Suffrage Societies]. If only walls could talk I would love to listen and take notes. In 1913 a Suffragist Pilgrimage took part with seventeen counties all marching and meeting up at Hyde Park. A local pilgrimage [non- militant] also took place for those that could not take part in the London march and Amelia Scott is quoted as saying:

‘The object of this pilgrimage is not pleasure, or excitement, but to demonstrate to those persons who still maintain that quiet, home-loving women are against this movement that this is not true; for here, before their very eyes, are such women on the road’


Can you imagine what it must have felt like to walk in those shoes and clothes on roads and pathways not as ours today? 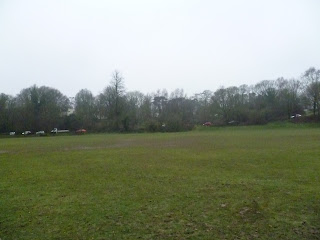 Then onto the lower cricket ground and the place where over 1,000 people gathered  to hear the words of Muriel Matters, who toured South East England in 1908 in a caravan to speak on the Votes for Women campaign. Many came  to heckle and jeer, many to listen. You can listen to Muriel talking about suffragette leaflet distribution  from an airship over London here http://www.bbc.co.uk/archive/suffragettes/8315.shtml 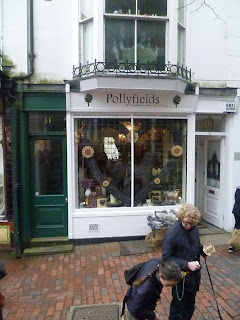 We then moved the the Pantiles and the shop which is currently Pollyfields, 11 The Pantiles. In 1913 this was the office and shop for the WSPU.[The Women's Social and Political Union] Available to purchase here were campaign badges, posters, games, cakes and sweets. 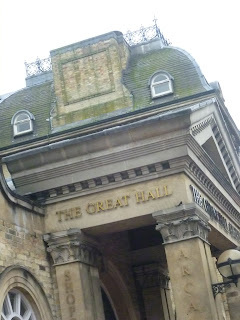 Then to The Great Hall and  heard about the meeting on the 29th April 1913 against suffrage following the burning down of the cricket pavilion at the Neville Ground. A newspaper containing the picture of Emily Pankhurst was left at the scene and so this circumstantial evidence led to the suffragettes being blamed.  Sir Arthur Conan Doyle gave a speech at this meeting against the suffragettes and this 'dastardly outrage' and said that these women were a 'disgrace to their sex'. The audience overflowed the room in the Great Hall onto the streets where three suffragettes were carrying literature and heckling in the surging crowds, eggs were thrown and hats knocked off and clothing torn and the ladies concerned were removed to the police station for their safety.
The following was reported in the local paper 'The Courier'

"There were three of us, Miss Le Lacheur, Miss Haynes and myself. We are all members of the Tunbridge Wells Branch of the W.S.P.U. We asked various questions of one of the speakers, because he misinterpreted our motives. We simply had to contradict his statements. He also said things rather offensive to the W.S.P.U., and so, of course, we did not stand that either. He then deliberately said, ‘If they are not quiet, put them out’, thus I took it, deliberately inciting the mob.

“Then we felt the crowd hustling. They seemed to attack me more than the others for some unknown reason. I simply folded my arms and felt myself being pushed about. An egg hit me in the face, and its contents ran down all over my clothes. My two companions, who were being somewhat similarly treated, kept close to me. I felt my head being pulled back, and my hat was dragged off. Then the Chief Constable, Mr. Prior, came up and advised us that we had better allow the police to take us to the police station. In fact, they insisted upon doing so, and thither we went, followed by a booing and jeering crowd". 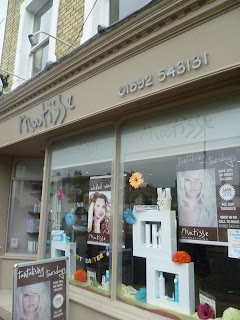 Then to the hairdressers, Matisse at 18 Crescent Road which in 1910 was the shop, office and clubroom for the NUWSS [National Union of Women's Suffrage Societies]. It was the second largest branch in Kent  and in the war was used for charitable donations of clothes for Belgian refugees. Amelia Scott was the vice-president of this society.

What a fabulous town we live in. What fabulous women lived here and what a fabulous free walk. Thank you Tunbridge Wells Museum and the University of Kent for your work in making available information on this subject.

Personally, I think there should be a campaign for blue plaques to honour these women and these societies in Tunbridge Wells. Votes for Women is such an important part of our history and I think it is amazing that so much of the activity took place in this town. But at the moment it is a hidden history.


I am looking forward to the final talk in the series here: http://www.tunbridgewellsmuseum.org/default.aspx?page=2356 A plea for decency: Tunbridge Wells Women on both sides of the law.

Since the publication of this post I have received the following information:

The headquarters of the Women's Suffrage Society is now the Seven Springs Charity Shop.
Posted by newtonhouseltd at 18:33