New Year and 'Hostages to Fortune' by Elizabeth Cambridge A quiet time of year after a busy time. I don't know whether it is the lack of light or the lack of fresh air but January always has a touch of melancholy about it. All I want to do is hibernate and eat food. From my blog it may appear that I have been doing that all winter, winter that is in terms of the months of the year as opposed to the actual weather as I think the real winter is just about to descend. I haven't actually been hibernating, I have been busy writing, cutting and pasting [in many ways] and trying other avenues of creativity and saving all my stories for submissions. So my poor blog has been left and actually it has been okay on its own. It has had its own visitors who just stop by for a look and leave again without a thank you note. I have also not been writing in those times when family life takes over and you run from one event to the other trying for perfection when in the end, it was good enough is all that you can hope to achieve.
So why today have I decided to come back and post? Well it is because I need a place to return to occasionally to record events that I do not want to use in my writing.... yet.

Post Christmas, when all the young left, brought with it a quiet emptiness and a realization that the new year was also new in another sense of the word. Life is different to how it was last year.Children grow up and just when we all think we understand each other, they move on, quickly, and we are left behind to readjust wondering where the time went and what we have to show for it. They are now in a world that we no longer understand and we are on the sidelines.
This is not all doom and gloom and to shake myself out of this I turn to reading and quiet pleasures. Because at the Persephone tea time reading group it was our turn to read 'Hostages to Fortune' by Elizabeth Cambridge and this was my perfect therapy. All along I have believed in that old saying that you will find your friends in a book. Well here it is that I find that throughout history women feel the same way that I do. This wonderful book based from 1915 to the early 1930's follows a family in the inter war years. But it is so much more than that. At first I was not sure how to take it. One chapter did not necessarily follow the other and there were huge gaps in time. Then I realized that this didn't matter, each chapter could be read as a short story in itself. Not that I would suggest doing that. The whole book should be read through in order as it does complete a picture in the end, rather like life itself. But it is  more than just a story. It is a manual for exploring the journey of life, and it is a timeless one. It has a relevance to today's woman just as much as the reader when it was originally published  for it is about  the passing of time and how ageing changes and shapes viewpoints. Particularly a woman's viewpoint. It is also a study of generational differences not just in families but also in society.  It explores how one generation can never hope to understand another with a gentle acceptance rather than a disparaging tone.

I have found this book at the right time in my life and I have to say I think it is one of the most memorable books I have read, being so much more than just the sum of the story line  I have ordered another book by Elizabeth Cambridge, an out of print edition and I am looking forward to its arrival with great interest. 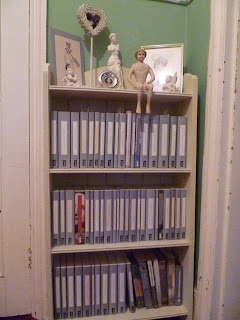 I inserted this photograph to show how my Persephone collection has grown since my earlier posting:
A Window to my Soul: Persephone is on the landing and eating chocolate.....http://newtonhouseltd.blogspot.co.uk/2011/07/persephone-is-on-landing-and-eating.html