The garden my house planted. 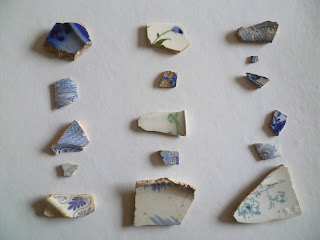 In Victorian times people did not have a waste disposal system for rubbish. The garden was used to bury all sorts of broken objects. In our garden we find old pieces of fire-places and sometimes when we are digging other objects come to light. One of the most interesting being the pieces of Victorian pottery that appear as we turn the soil .

I am a creature of habit with my bulbs and prefer the same colours, pink, white and blue being favourites. So I find it amusing that the garden or rather the house also has favourites when it plants china to bloom like forgotten seeds. Most of the collection I have is blue, willow pattern being a favourite, with the occasional green swirl. I would love to see the bigger picture of the whole design. I would also like to date them.

These pieces of china have sat in a jam jar being added to over the years. But now I thought I would make a visual picture of these little shards of history.

In a way I regard these little gems as spirit memories that the house and garden occasionally manifest.
Rather like the claw marks of the dog that used to live here has left on the back door.
The Mary Poppins book that emerged from behind a radiator and the piece of paper with a list of clothing for the start of an Oxford University term from early in the 20th Century with its listing of cricket whites that came to light when a carpet was lifted.
I have a copy of the 1881 Historical records for the house, when the house had a name and not a number.
Two previous occupants have also visited us to look around their old home and slowly a picture is emerging of the life this house has seen before we stepped over the threshold.

They are all going in a box marked 'Our Home' as I build a framework like a family tree for the footsteps that have left their imprint in someway.
I also wonder if I should leave the collection with the house, rather like a census. These people lived here and ate here. But then my family and I are part of the story. Is it up to us to interpret it or just let it evolve at its own pace and leave its own clues like a treasure map?


The book I have pulled from my shelves is Julie Myerson's 'Home ' published by Flamingo. 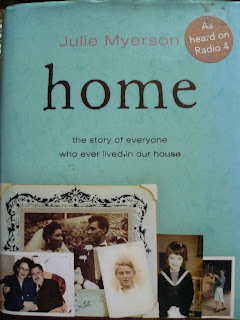 I am intrigued to read about her home. But I am also interested  to find out about mine.
Posted by newtonhouseltd at 19:16