Cats in the Indian Glasshouse. 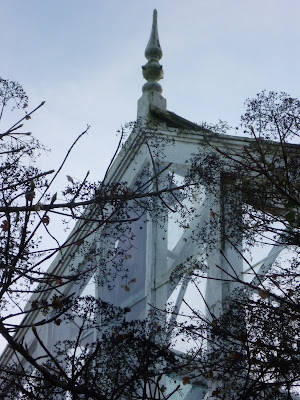 We are always told that we should never go back to where we went before . It can never be as good, it will never live up to the memory.
But don't you find that rules are always there to be broken?
I just love to prove that what went before can be bettered. Or rather like nature, objects can be nurtured and encouraged to grow. Small seeds grow into beautiful flowers. Flowers bloom and fade, turn to seed heads that are glorious in an architectural way. Each season has its own visual delights.

So we went to The Walled Nursery again.

Time had moved on and ' The Secret Garden' had evolved into A Little Princess.  I felt like Sarah Crewe  when she woke up surrounded by beautiful colours in her stark garret. Transformed into the 'little magic room'  the little girl in the attic was transformed into a Princess. India had arrived and on the day of our visit  her scents wafted across the garden permeating all vistas. 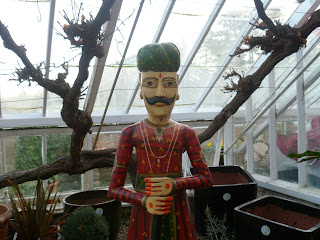 Sarah Crewe befriends Ram Dass, and we are greeted by this magnificent statue as we enter the glasshouse.

Instead of Melchiesedec the rat and the little monkey , two adorable cats -Billy and Ben dart wide eyed amongst the foliage and decorative exhibits. Eyeing visitors with trepidation and curiosity these cats explore the pathways and find treasures from Rajastan provided by Bazaar 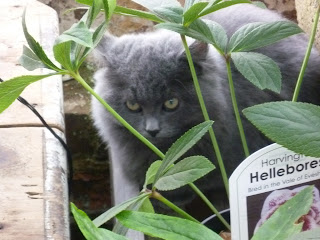 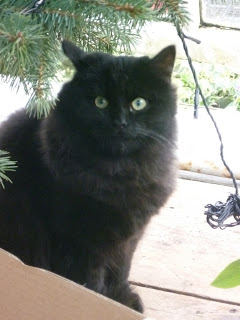 'All the bare, ugly things which could be covered with draperies had been concealed and made to look pretty. Some odd materials of rich colours had been fastened against the wall with fine, sharp tacks - so sharp that they could be pressed into the wood and plaster without hammering. Some brilliant fans were pinned up, and there were several large cushions, big and substantial enough to use as seats.' 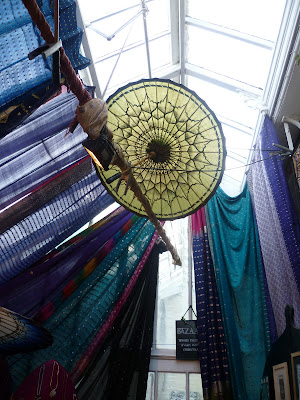 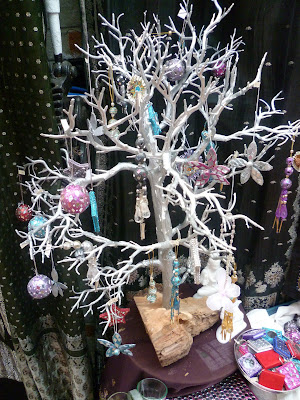 Time for refreshments .
Mulled apple juice- with an added twist of chilli- not sure if this is a trade secret but it was delicious, accompanied by hot mince pies, surrounded by Violas which had been lovingly tended from seed.
With Billy and Ben racing around I thought it rather apt when I came across this description of the tricolored viola  bred by Mr T. Thompson. In 1810 Thompson described the viola as 'a miniature impression of a cat's face steadfastly gazing at me.'*
. 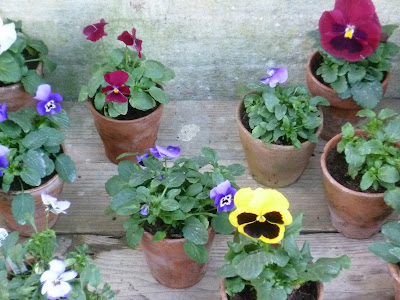 Which one shall I pick? 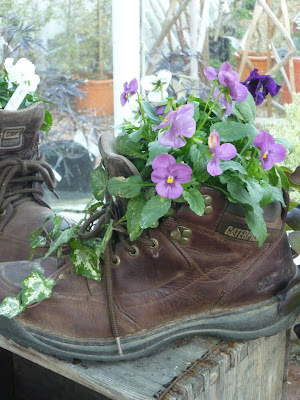 This container made me smile.

Oh for summer weddings and balmy evenings in candlelit gardens. 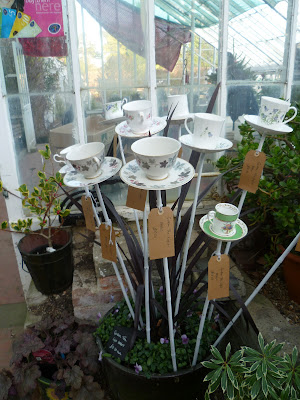 Smoke drifting on a winter breeze. 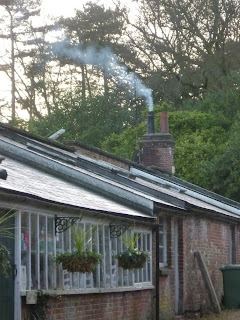 Time to go home, with buttons in the shapes of stars, flowers and fish to be transformed onto objects of home-made creativity. With hand-embossed papers and lavender filled hearts.
With violas planted in old toms, and stacks of pots - our own potted history from the 1920's tied with 20th  century twine but displayed with historical perspective. 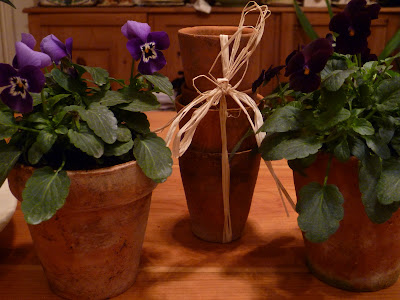 * 100 Flowers and How They Got Their Names . Diana Wells.
Posted by newtonhouseltd at 00:58