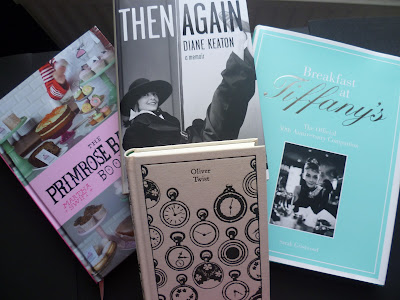 I love the build up to Christmas and then it all overwhelms me. No matter how hard I try or how early I start, I always feel as though I have lost the plot.
By the time Boxing day is over I need the light, the space and the fresh air. I long for the clutter to be cleared, for Christmas to be Christmas past and Christmas presents to be assimilated into the household structure.
The period between Christmas and New Year is used to acclimatize to new belongings, ideas and plans.
It is always lovely to receive books as gifts. They represent moments of escapism as well as being informative and inspirational. These gifts from 2011 are a starting point for  my new year resolutions .

'Then Again' Diane Keaton a memoir published by Fourth Estatehttp://www.4thestate.co.uk/2011/11/then-again-by-diane-keaton/- I have to admit I posted this on facebook as a like. My wish was granted rather aptly by my sister, Bridgette. This is a memoir about Keaton's relationship with her mother and so much more. For me, my relationship with my mother and indeed grandmother are ones I wish to reflect on throughout the next year.
Diane Keaton is one of my favourite screen actresses and she has influenced me in so many ways.' La Di Da.' I emulated her 'Annie Hall' style in the late 70's and 80's with hats, ties and waistcoats. Particularly on a visit to Canada with my grandmother- this was part of my own version of a grand tour , a personal journey of growth and development. The power of travel, the connectivity of family and the binding ties of strong women all had their starting point in this moment. All virtual gifts with messages to impart. Some of these messages were and still are wrapped in time , their full meaning only revealed through the layering of life's time frame.

Diane Keaton also gives me another resolution , to revisit  her films, many of which have helped shaped the person I have become.  Part of my degree was a module on the Representation of Women in Film and Art and many hours were spent analysing cinematography . I love Woody Allen so 'Annie Hall' is a definite plus a few of Allen's other films including 'Manhatten' which gave me my love of George Gerswhin. Not sure I can sit through another viewing of the chilling 'Looking for Mr Goodbar', I watched this three times in Newcastle , late at night, then made a watchful journey home on the metro. My memories of this film I have written in a paper stored in the loft. Time for a little sorting here I feel. I have NEVER watched 'The Godfather', I need to rectify this. Then I must have a look at 'Unstrung Heroes' Keaton's directorial film. Actress, Director , we all change and develop .

'Breakfast at Tiffany's' The Official 50th Anniversary Companion. Published by Pavilion.
Another film link, another list of films to watch. Including 'Funny Face', cannot forget the 'Think Pink' sequence, 'Sabrina'  and 'Roman Holiday'. Note to myself, resolve to sort my wardrobe. Wear only lovely things. They can be vintage, pre-loved from charity shops it does not really matter. Just throw out, donate the clutter, the dated, the fat clothes . Rather like never leaving the house without my mascara, never leave without wearing a loved and lovely item of clothing.

'The Primrose Bakery Book' published by Square Peg a part of Random House.

This was a present from my very dear friend Wanda, whose daughter Alice appears in this book. So every time I use it I will think of them both . Mothers and Daughters , creative and vibrant women , all themes for my resolutions. I love cooking, mostly puddings and cakes, I love photography and have always preferred to cook with pictures . After all I eat with my eyes as well as my taste buds. So today, New Year's eve I have made toffee popcorn bark, a recipe my daughter has shared with me. I tell myself and my waistline that the pleasure is in the creation, the presentation and not necessarily the devouring. 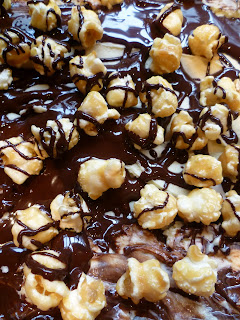 'Oliver Twist' by Charles Dickens published by Penguin Classics.
This beautiful edition was given to me by my children.
So in this year of the 200th birthday celebrations of his birth, my resolution is to read more Dickens.. Great Expectations is on the go and I will also be reading ' Nicholas Nickelby' with my book group of women friends.

My presents to myself. This vintage brooch. Initially I thought I had no-one to give it to with the loss of my Mother and then I thought well it's me. A reminder of an important part of me , a woman but also significantly a mother . 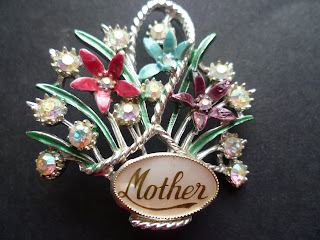 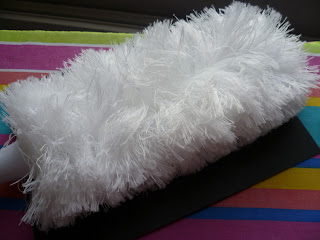 Also a duster: time for a clean sweep, tidy up and polish the past and clean the path to a new future.
All the best for 2012.
Posted by newtonhouseltd at 15:58